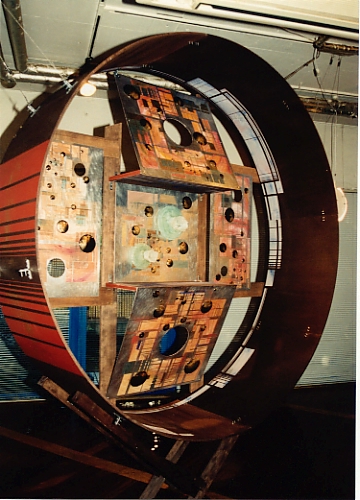 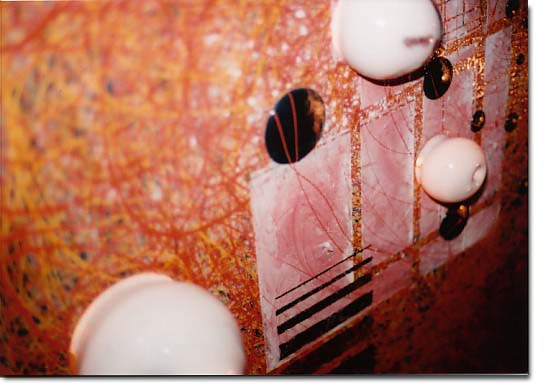 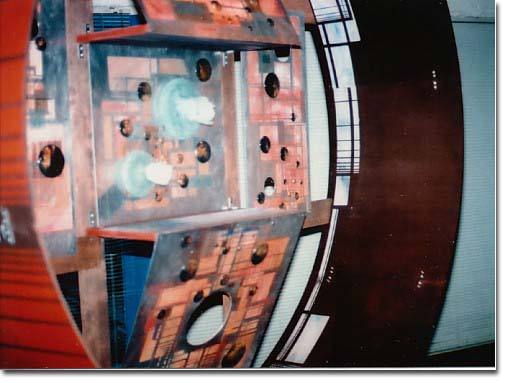 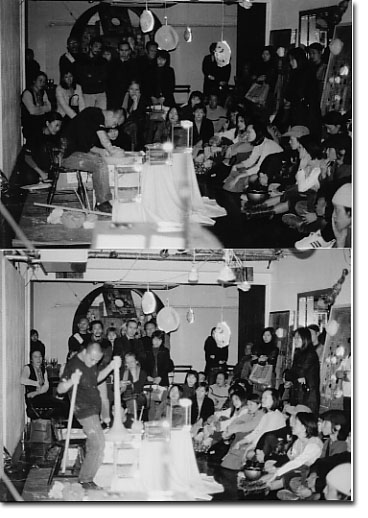 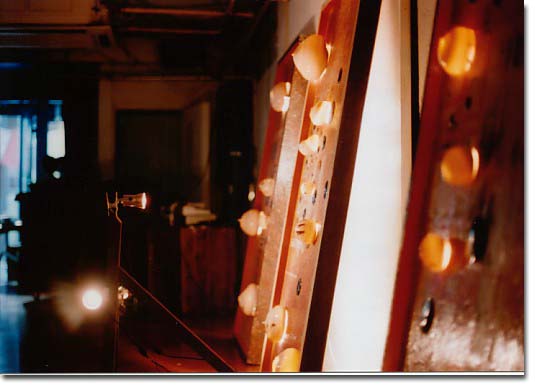 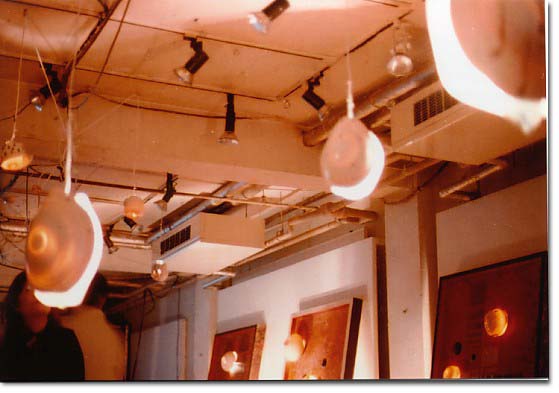 the collaboration show in Aoyama Tokyo

Extremely thin thrown porcelain caps stick out of three wood panels painted in acrylic, molten rubber and gold powder. The sheen yet serene red-gold reminds one of gorgeous Japanese silk fabric with the peach-like porcelain caps glowing out of the canvas. Shell-like ceramic lamps hang from the high ceilings throughout the Tokyo gallery’s space illuminating a humungous 3D painting (8ft in height) situated at the very end of the space. Five sheets of aluminum painted on both sides sit at different angles in the centre of a huge wooden barrel-like frame. Heavy chunks deep green glass with light passing through the back suggests the spectacle one would encounter looking towards the sky on a sunny day from 10 feet below the ocean’s surface.
The painter, Yukiko Nakamura, expresses her world through a variety of mediums which is seen in her use of the aluminum sheets instead of typical canvases. Molten rubber poured on the sheets resemble dew drops ready to fall from a leaf early in the morning. Applying golds, reds, yellows, and browns by pouring the paints from the brushes rather than brushing in the standard way allows her to create more profound combinations of colours and materials which add to the uniqueness of Yukiko’s work.
Large heavy chunks of fused glass accidentally shaped like mushrooms or crown caps (Have you seen the high-speed pictures that capture the shape of a milk at the very moment it splashes?) were used to add movement to the painting. Using translucent glass allows the light to not only become a part of the painting, but also to act as a perfect liaison between both sides of the painting (remember, its painted on both sides!!). The back side of the painting s a recombination of the human body which is Yukiko’s favourite motif.
After a one hour break, and as the sun went down, the second part of the show commence. “The Real Crossover Collaboration” began with Anita, a photographer from Poland, projecting her self portraits on the wall as she chanted poems which synchronized with each picture.
To fill the vacuumed Darkness created by the rich colours of Anita’s pictures and poems, the string of a “shamisen”(Japanese banjo) was struck. Instead of playing it in the traditional way, which is to “pick” at the strings, Norikazu Yamaguchi beat Tsugaru-Shamisen style. This was a technique developed by the people from the Tsugaru region of northern Japan who found that beating the strings helped them to withstand the severity of the long, cold, and gloomy winters. Guitar by XXXXX flowed over the beat of the Shamisen as the two stringed instruments from east and west jammed together to attract audiences in a very new way.
Before the afterglow of the bi-cultural stringed performance faded away, a triformed movie by Keiko Tsuji started to roll on the wall. Trying to synchronize his potter’s wheel performance with the movie scenes, Hide stretched a bowling ball
chunk of clay into a 1.5 meter high narrow cylinder using a wooden stick for support.
As the clay reached the limit of it’s stretchability Hide slowly removed the support stick form the cylinder allowing the long tube to begin swinging naturally with the spiral energy from wheel and gravity. Using his hands, Hide helps the cylinder to fall beautifully, as the show’s theme is “Fragile”.
For the last section of the movie Hide threw four fist-size closed forms with white clay, one at a time every two minutes upon which time they were each thrown into the clear aquarium to be seen slowing breaking down while the movie scenes were now synchronized to his performance. Balls made of clay placed in water will float for the first half minute before starting to sink as the clay’s skin melts, allowing air to leak out. Light shining up from beneath the clear aquarium transforms the bubbles into spirits being released from within the holds of the clay forms.
As the film ended the gallery fell into darkness as all the lights were turned off for a few seconds before the loud sound of glass shattering blows our ears. The “Fragile” performance ends.